IPSec—what is it and how does it work?

The Internet has expanded more and faster than anyone expected. The rate of development has been so rapid that the Internet Protocol standards (IPv4) cannot meet the current expectations and requirements, especially regarding security and supporting the growing number of IP addresses. As the network expanded, the amount of sensitive data grew. Information, like financial transactions or internal company communications, needs to be secure. IPSec was introduced as one of the solutions protecting this kind of data by encryption and authentication between endpoints.

In this article, you can familiarize yourself with this solution—how it works, the core protocols, and more about the pros and cons of IPSec.

The history of IPSec began in 1993 when IPSec VPN was used to connect the east and west coasts of the United States for the first time. IPSec secures higher-level protocols and resolves the earlier addressing problems of IPv4. Put simply, IPSec makes communication secure. The “IPSec'' abbreviation comes from security, so IPSec stands for IP Security.

This framework ensures data confidentiality (packets are encrypted before their transmission over a network) and data integrity (checking if packets were unchanged during transmission) at the IP layer. IPSec has a feature called antireplay that identifies and rejects replayed packets. What is also worth mentioning is that IPSec can protect more than one data flow.

How does IPSec work?

The graphic below is a visualization of how IPSec works. The process can be divided into five main steps. The picture alone cannot fully convey the process’s complexity. For that reason, each step is fully described to give the best possible explanation. 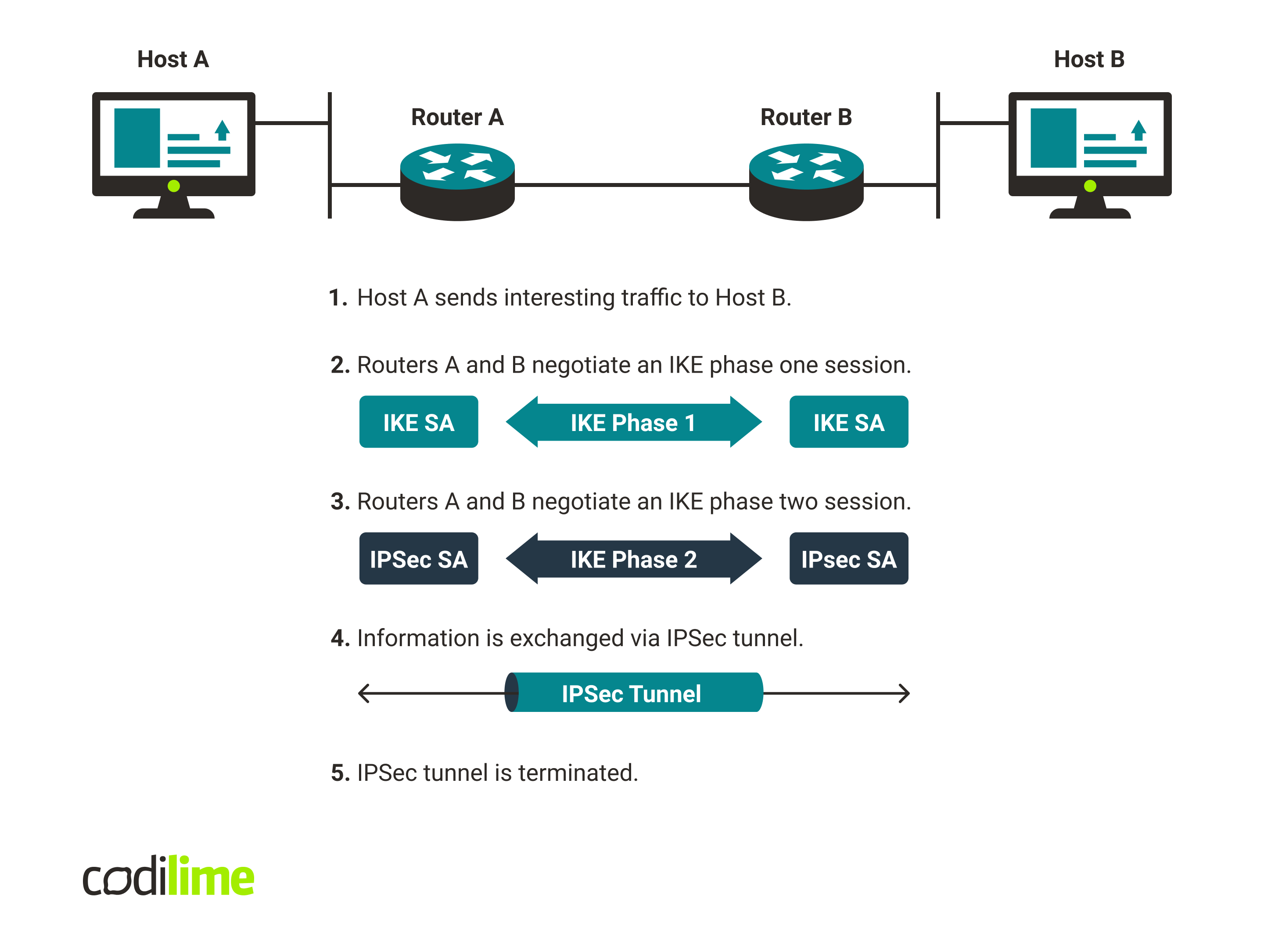 Many enterprise firewalls may be able to establish IPSec tunnels on demand. The firewall monitors the traffic flowing through its interfaces and checks if that traffic matches the configured policy. If a match occurs it is assumed that the traffic should go through the secure channel. However, nowadays this step looks slightly different—the modern IPSec sets up ready tunnels (which can be “IDLE”).

In many cases, two types of policy statements can be distinguished:

Here, IPSec is used to negotiate the necessary policies for setting up a secure circuit. IKE stands for Internet Key Exchange and its main function is to authenticate IP Security peers and build a secure channel between them, making the IKE exchanges possible. Two modes are possible in this phase:

In this phase, the IPSec tunnel is set up. Steps taken during the IKE phase two include negotiating the IPSec (SA) parameters that IKE SAs protect, and establishing and regularly renegotiating IPSec SAs.

Deletion or timing out can cause termination of IPSec SAs. When this happens the keys are discarded, and IKE phase two (and sometimes also one) is performed again to generate new SAs and keys. However, the new SAs can be set up before the old ones expire to keep the flow continuous.

How does IPSec work in practice? If you are interested in details, read the case study about connecting different VPC/VNets to multiple clouds with IPSec as one of the core technologies used.

The main aim of the core protocols is to ensure security when encoding information. In IPSec, there are two to mention—the AH and ESP protocols. The Authentication Header (AH) protocol is responsible for data authentication but currently, it is rarely used. The AH aims to confirm that the delivered packet stayed integrated during the transfer. ESP (Encapsulating Security Payload protocol) encrypts packets—even if hackers intercept the packet, they do not have access to the packet content.

IPSec, like any solution, has its advantages and disadvantages; there is nothing surprising about that. Still, it is good to know where the limitations lie and how to profit from the solution’s strengths.

Benefits and disadvantages of IPSec

IPSec is a respected solution because of features like:

As we all know, there is no perfect solution. IP Security also has its disadvantages. Below you can find the most crucial ones. That does not mean that IPSec is not worth your attention; only that it’s necessary to keep these points in mind while developing a project:

The IPSec topic is broad and this article merely highlights the most significant information you should know up front: key protocols, components, the advantages and limitations of IPSec. However, this solution has many more interesting aspects which will be described in future articles—stay tuned.

Head of Sales
More from this author

6 minutes
The Catalyst 9300 platform by Cisco - what it is and how you can us...
Krzysztof Naglik