In the previous article, we introduced our reasons for exploring SONiC’s potential in terms of building new network functionalities, presented a use case, and described how we approached the task on the logical level.

In this part, we want to share the experience we have gained through the development process. Note: please do not treat this as a comprehensive developer’s guide. What we explain here is our process and the key takeaways from it, which we believe might come in handy for other SONiC developers.

Before we start, a few words about the knowledge sources and repos.

From a developer’s perspective, the SONiC project has several resources used on a daily basis. Those include:

Apart from the official sources, we’ve found the Developer’s Overview of Sonic (presented on Youtube as well) by Praveen Chaudhary to be a good starting point for an aspiring SONiC developer.

The intended solution was to extend ACLs with UDFs. How was that approached?

Having to deal with ACLs, the first place we checked was the doc/acl directory, specifically ACL High Level Design. It showcases the flow diagram of the creation of ACL objects in terms of the logical architecture of the control plane (figure modified): 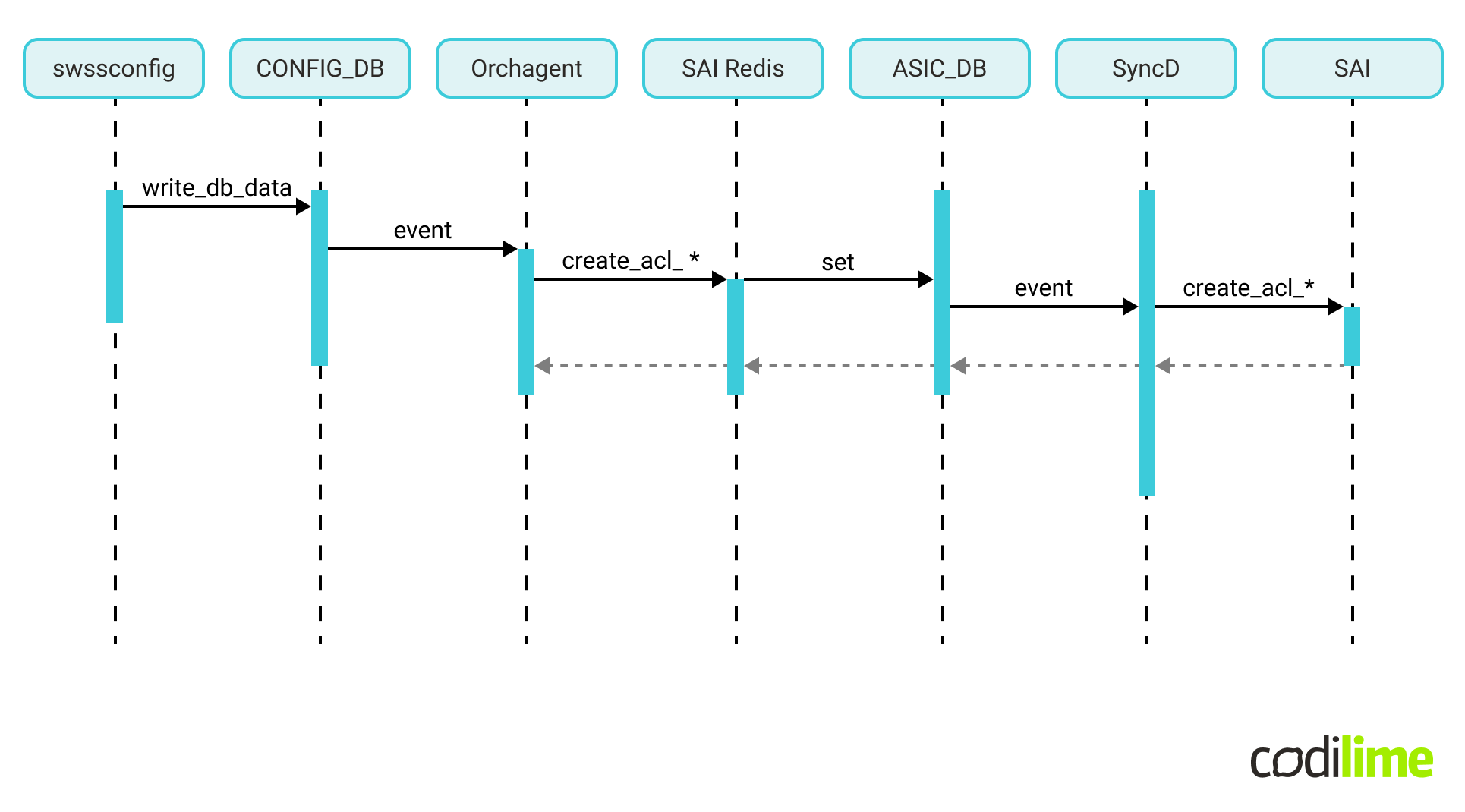 The logical architecture does not map 1-to-1 to the physical software architecture. In terms of the processes involved, ACL creation needs to engage the following physical components: 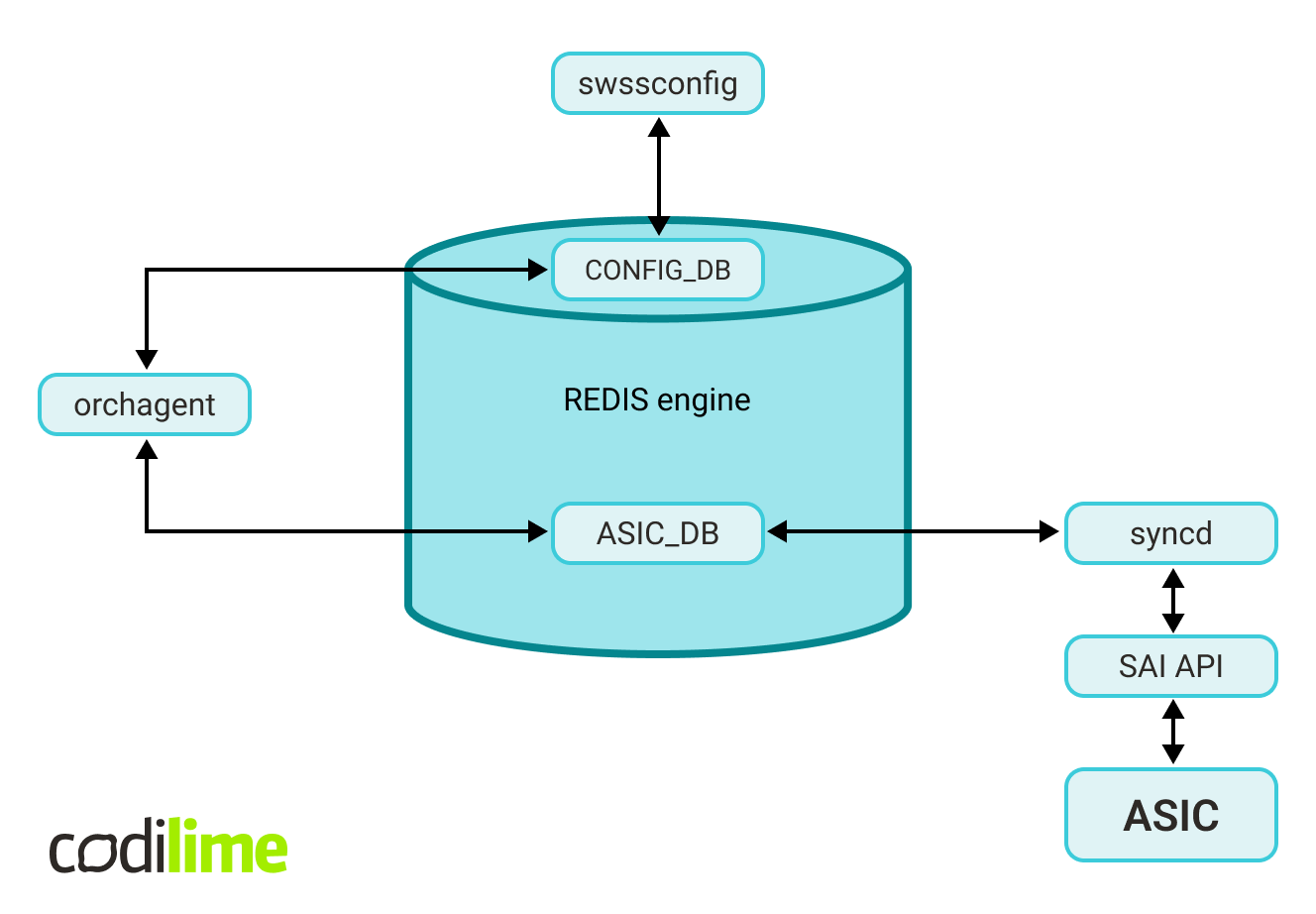 Our plan was to update the control flow and verify that the ACL configuration based on user-defined fields is handled correctly throughout the entire stack.

First, based on the SAI documentation UDF-based ACL and the actual SAI definitions, we’ve specified the proper SAI API usage for our use case.

SAI, for ACL and UDF mechanisms, defines several object types which must be used. Those objects and their relationships are presented in the picture below:

Note: for ACL RULE and ACL TABLE objects not all attributes are shown (only those important/used for the use case)

The initial research has shown that most of the development work will be done in Orchestration Agent (aka Orchagent). It’s the component responsible for interpreting the user configuration and calling the SAI API (through a database proxy). We needed to implement two kinds of change in orchagent:

We could separate the two phases of development:

Knowing what new data is required by SAI from the user, we’ve updated the Configuration Database schema, which serves as an input for Orchestration Agent.

Having specified the required input and expected output for Orchagent, it was enough to implement the test case for configuring UDF-based ACLs using the existing Orchagent unittest infrastructure:

Finally, using the test-first approach, we implemented and verified the required logic in Orchagent. Looking at the ACL flow diagram, the central piece was working as expected: 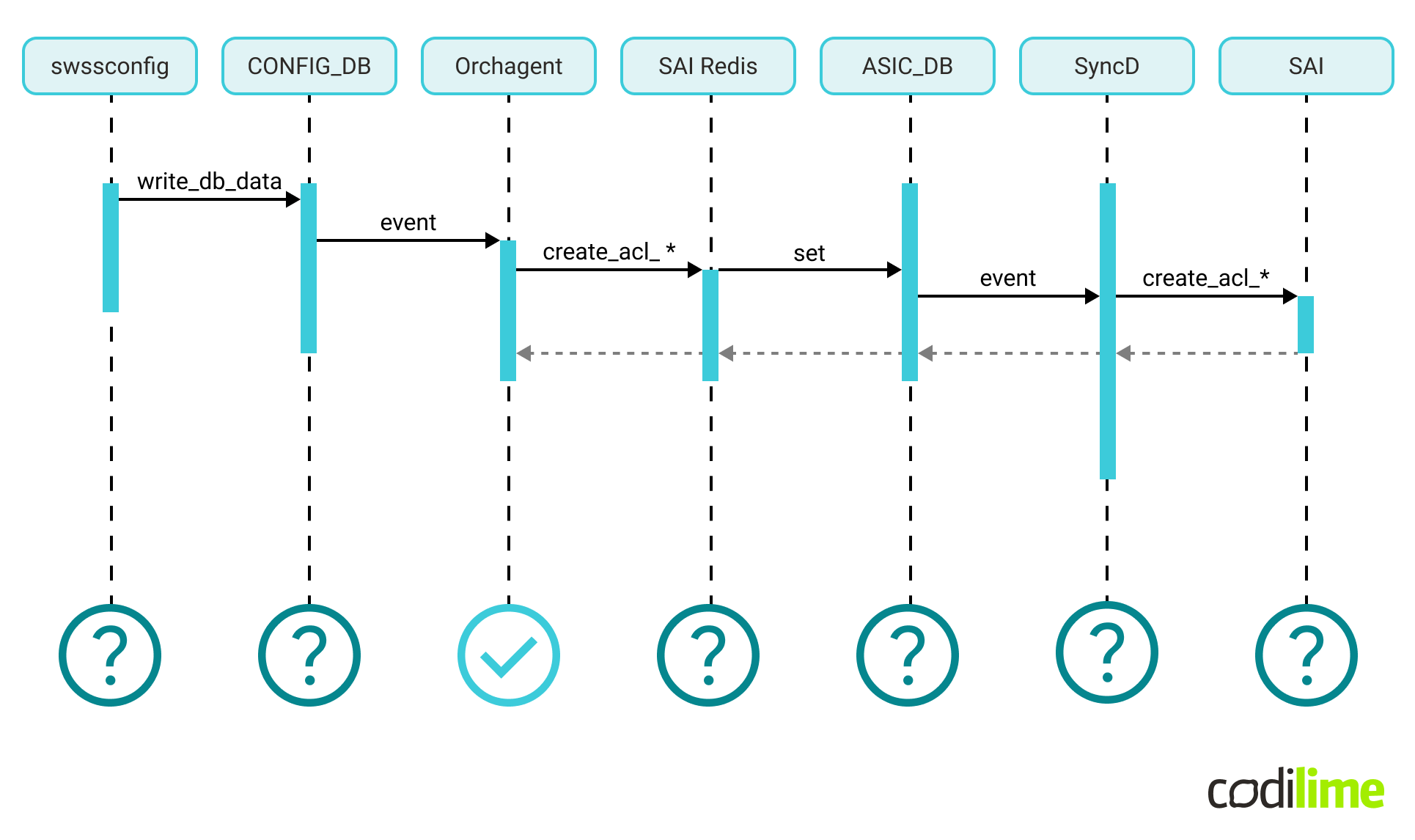 At that point, we were not in possession of a physical switch with SONiC installed and were thus limited by the capabilities of the SONiC virtual (software) switch. We performed multiple trials, but could not get the software switch to respect the ACL configurations. That made it impossible for us to test ACLs on the data plane.

We could only verify if the control plane worked as expected. A valid approach to test that in SONiC is to check the ASIC_DB database, which reflects the current state of the underlying SAI-compliant ASIC.

The scenario was simple:

There is a library in SONiC (saimetadata) responsible for enriching SAI API with additional runtime metadata. We configured a SAI object not used by SONiC before and some part of the SAI metadata logic for that object was not implemented yet.

Moreover, there are two components dependent on saimetadata: Orchagent (via the SAI Redis proxy) and SyncD (responsible for interfacing with the vendor ASIC according to the state of ASIC_DB). So now we knew that both Orchagent and SyncD needed a fix. 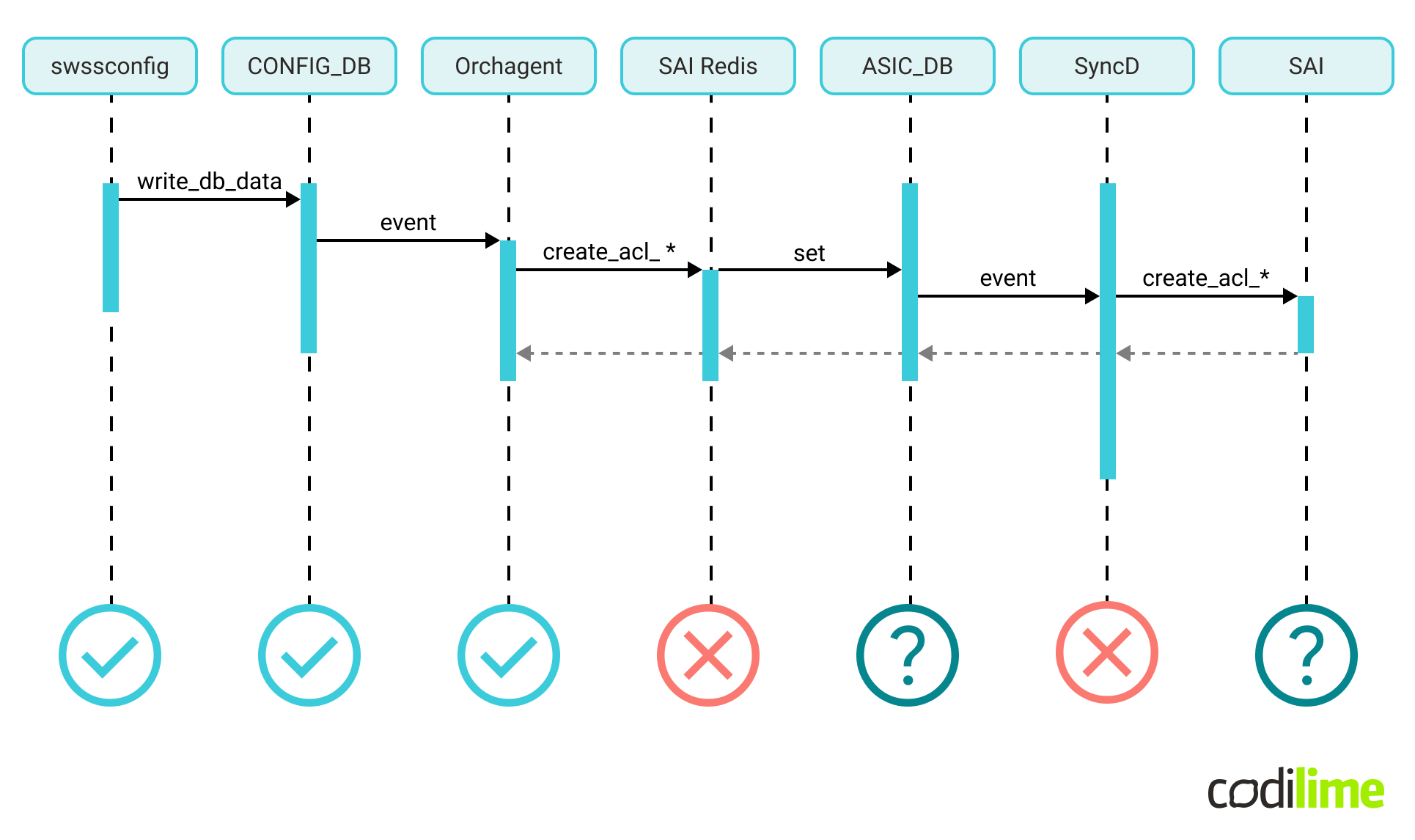 The saimetadata fix required adding missing validation of the data and turned out to be rather simple. We rebuilt and redeployed the swss and syncd containers.

At that point, the control plane test was successful: a UDF-based ACL configuration was correctly digested by the system, which could be verified by the ASIC state represented in ASIC_DB. 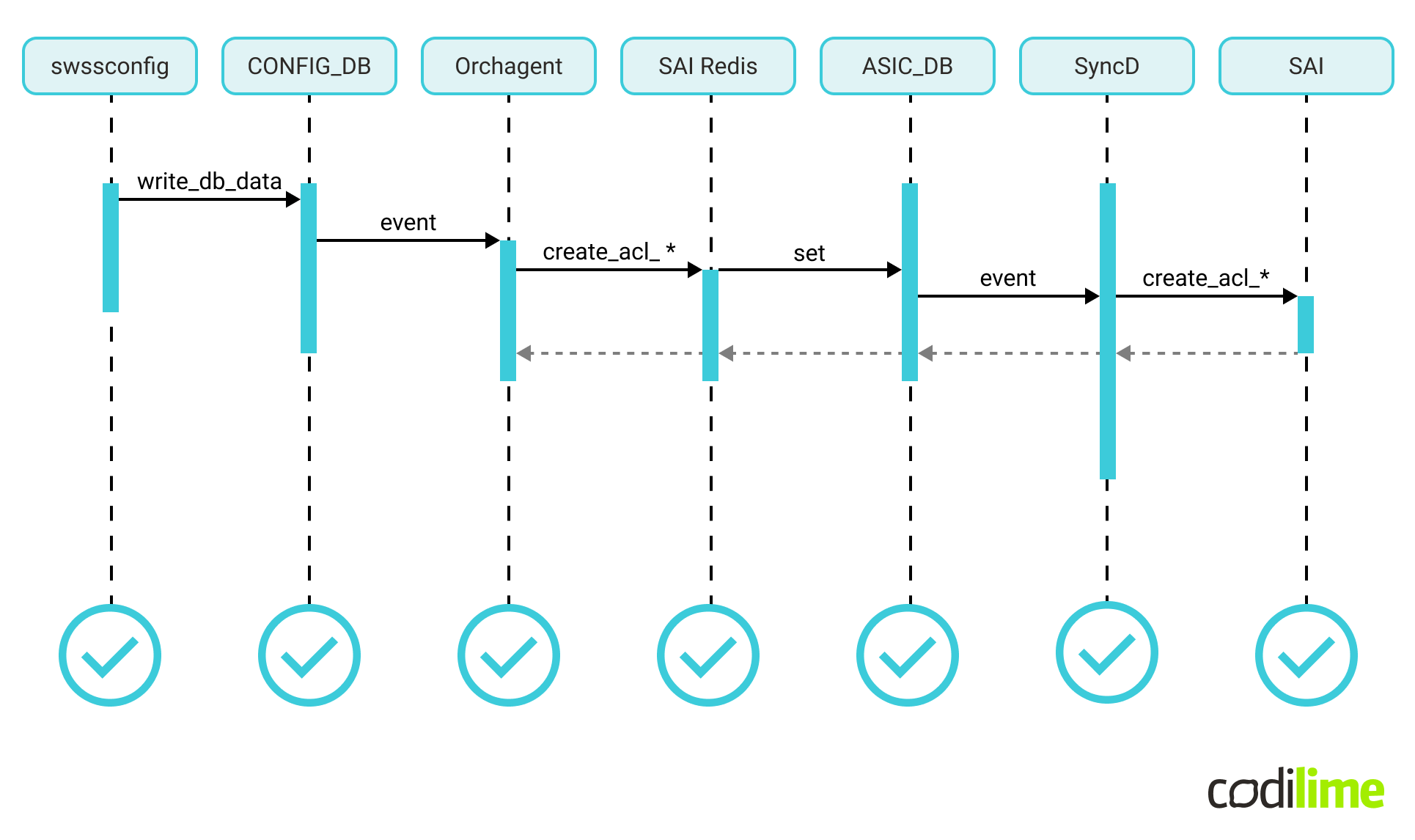 Because of the large number and variety of components in the SONiC system, the build system is rather complicated. There is a convenient Makefile available for the user. The actual build of targets, i.e. .deb packages, Docker images and binary images, is dockerized in multiple layers of containers and governed by autotools, aka GNU Build System. That gives a useful separation between the host machine and the build process, resulting in a robust build toolchain working out-of-the-box.

That however, does not play well with the smart modern IDEs used for development. Accurate index search, test framework integration, integrated debugger, code completion, and compilation errors shown in the editor before the code is compiled - all these increase one's productivity, but require the development tools to be fully aligned with the build process.

Our use case required most of the work to be performed within the Orchagent component, written in C++. Practically speaking, the simplest setup for a C++ project would be to have the dependencies and build tools natively on the host system, alongside the IDE (CLion by JetBrains in our case): 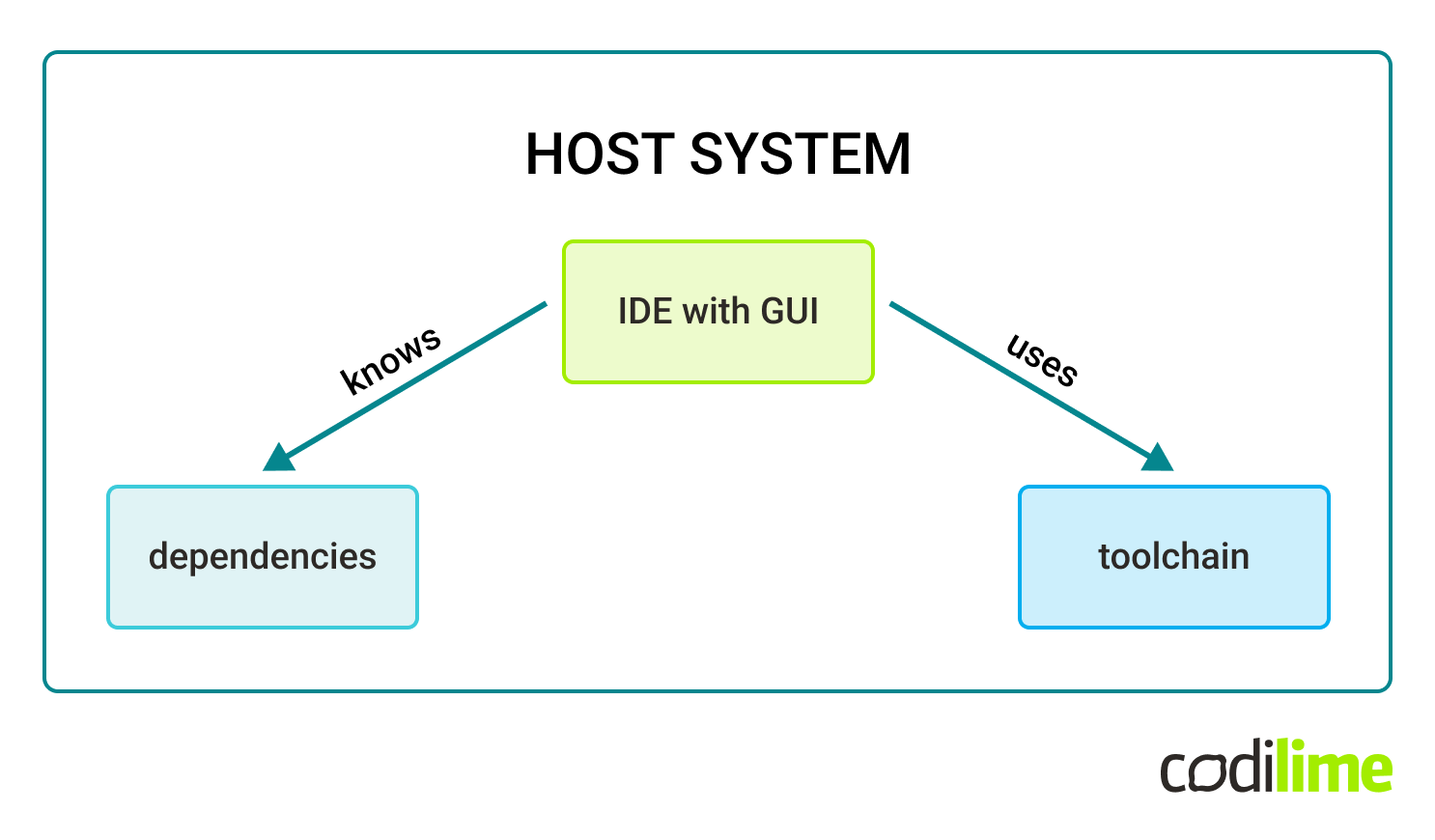 Given the system dependencies and package versions required, it is not possible to build Orchagent natively on a regular Ubuntu machine using the preferred IDE in a simple manner.

To work around that problem we used a tool called JetBrains Gateway. Orchagent build is configured inside a Debian Docker container hosted locally, with all the specific required .deb packages installed by hand. Then, the JetBrains client connects via ssh to the Docker builder instance and runs a CLion backend there. The host system is just used for rendering and interacting with the IDE frontend. The Gateway supports any ssh-enabled system, but hosting a Docker instance locally was just the most convenient solution: 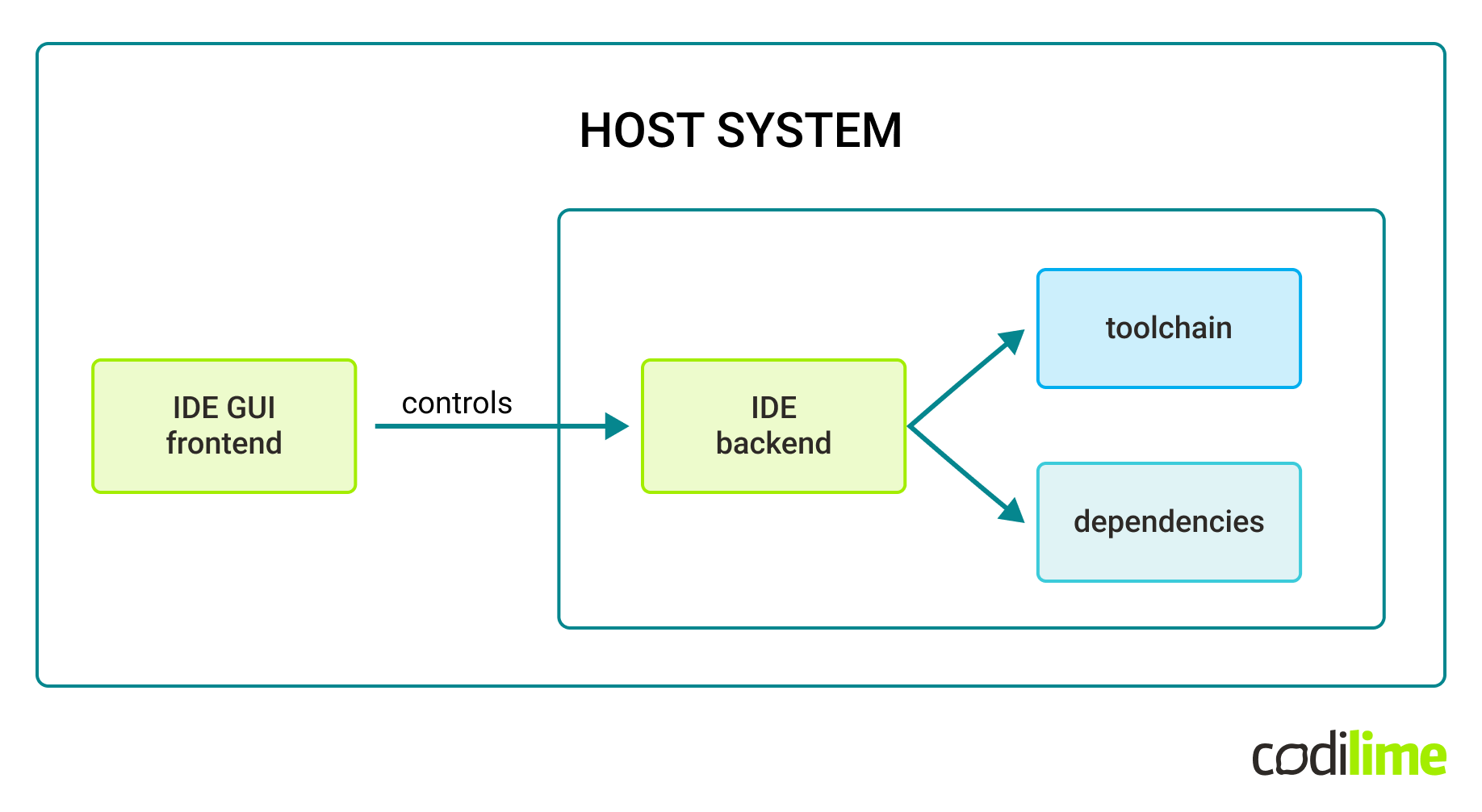 Judging from the information we got from the SONiC community via the sonicproject Google Group, such an approach does not seem to be widespread among SONiC developers.

There are of course alternatives to the JetBrains Gateway. For example, an analogous approach is available for VS Code in the Visual Studio Code Remote Development extension.

Judging from the information we got from the SONiC community via the sonicproject Google Group, such an approach does not seem to be widespread among SONiC developers.

There are of course alternatives to the JetBrains Gateway. For example, an analogous approach is available for VS Code in the Visual Studio Code Remote Development extension.

In the next part (coming soon) we will take you through the final stage - verification of our proof of concept in a lab setup.

Engineering Manager
More from this author