Why Vector Packet Processing is worth your time

The Vector Packet Processor (VPP) is a high-performance packet-processing stack that can run on commodity CPUs. In this article, I will take a closer look at what distinguishes this technology from others and how helpful it can be in meeting the demand for efficient network solutions.

The standard approach to packet processing

Regardless of the specific hardware or software implementation at the dataplane level, packet processing can be generally described as a sequence of operations that are performed on packets. This can be represented as a graph in which each vertex corresponds to an operation.

To understand the idea of ​​vector packet processing, compare it with standard (scalar) processing—that is, where each packet is processed separately. For this purpose, we will use an illustrative example (see Figure 1 below). Imagine a very simple packet processing graph with only three vertices, with each representing an action performed on a different type of protocol header. 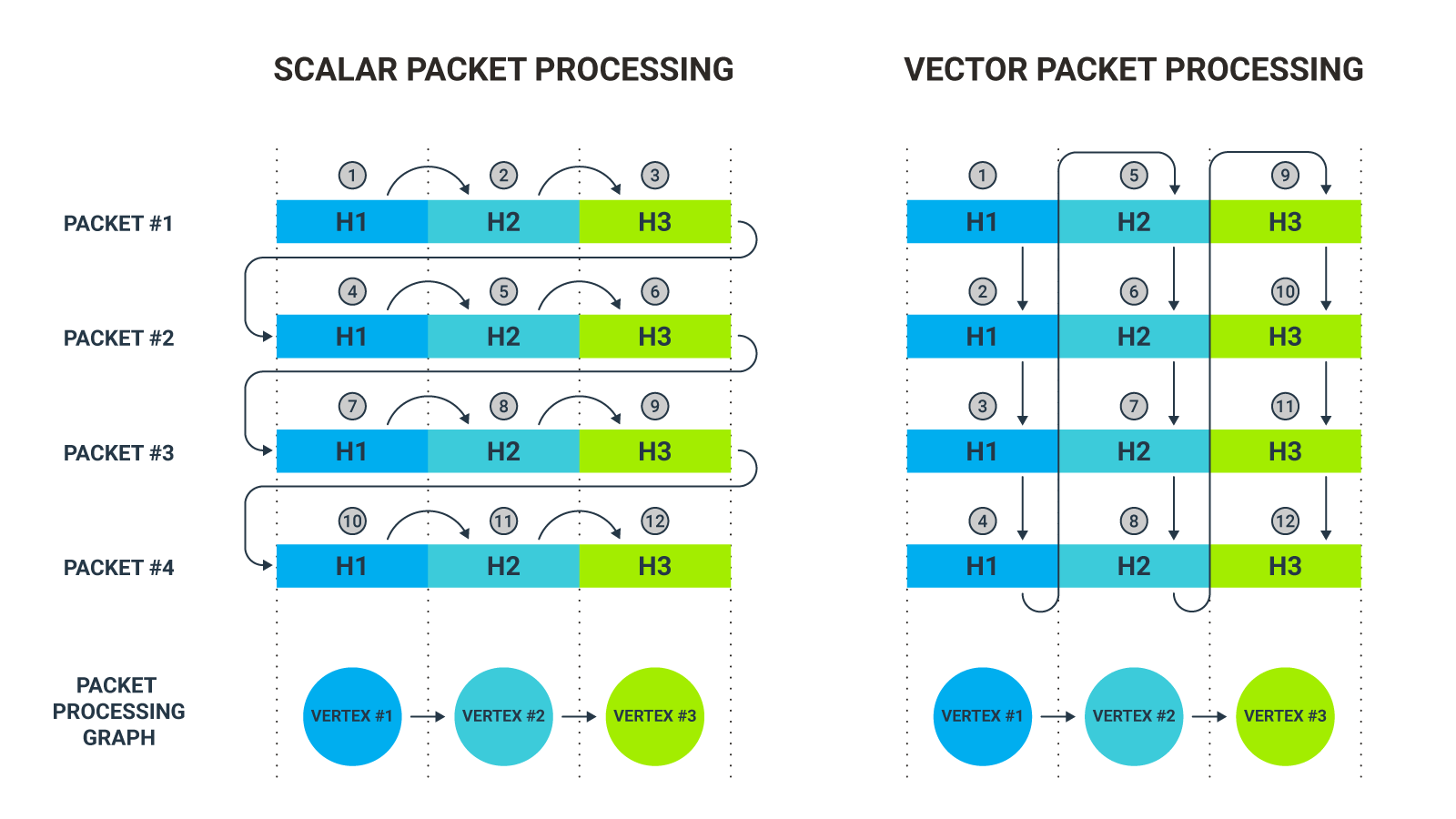 First, let's take a look at what the standard approach to packet processing will look like. When the first packet enters the dataplane, it will be processed through the entire graph, according to the established order. First, vertex #1 specific operations will be performed on the packet. Once completed, the actions appropriate to vertex #2 will be applied. Finally, the packet will be subjected to operations defined in the final vertex, #3, thus completing the processing. In each vertex, some specific operation will be performed on another header in the packet. All these steps will then be repeated for the second packet and then for all subsequent packets.

What is vector packet processing

At first glance, it may seem not to matter if each packet is processed separately but completely, or if several packets are handled in bulk but in stages. However, the technical details related to the packet processing mechanism quickly reveal that how it is done is of crucial importance.

To better visualize this, consider a simple example from another area of ​​life. Imagine that we have a fairly large pile of boards in front of us. In each of them, three holes of different diameter should be drilled. How should this be done? Well, we can take the first board, make the first hole in it, then change the drill bit, drill the second hole with it, then change the drill bit again and make a third hole. And then we can repeat this procedure for all of the other boards.

The open source VPP platform is based on Cisco's proven VPP technology and is part of the Fast Data Project (FD.io), a Linux Foundation Networking (LFN) projects. The key characteristics of the VPP framework are the following:

Where is VPP used?

Today, there are at least a few fairly significant projects, areas and solutions based on VPP. Here’s a look at some of them.

Ligato is an open-source Golang framework for developing Cloud Native Network Functions (CNFs). In particular, it provides a whole set of tools for building software agents that allow you to control and manage CNFs. One of the key components of the Ligato platform is the VPP agent that configures and monitors a VPP data plane. It provides a collection of plugins, each of which is used to program a different network feature offered by VPP.

“A Cloud Native Computing Foundation project, CNI consists of a specification and libraries for writing plugins to configure network interfaces in Linux containers, along with a number of supported plugins. CNI concerns itself only with network connectivity of containers and removing allocated resources when the container is deleted.” In practice, this kind of interface is commonly used in various kinds of container engines and container orchestration tools. The flagship example here will be Kubernetes. Today, there is a wide range of plugins that conform to the CNI specification. Some of them use VPP technology. This applies, for example, to Contiv-VPP or Calico/VPP.

Network Service Mesh (NSM) is a kind of system that allows you to handle complex L2 / L3 use cases in Kubernetes. The NSM network is completely orthogonal to the standard CNI interfaces. In practice, NSM enables the creation of dedicated interfaces for direct connections between containers or with external endpoints. One of the functional components of the NSM system is the NSM dataplane, which provides forwarding mechanisms for the implementation of connections between containers. It can be based on kernel networking or a vswitch. One option is to use the VPP here.

As described at https://www.netgate.com, TNSR is a “high-performance software router based on Vector Packet Processing. Developed, tested, commercially-packaged and supported by Netgate.” The solution can be deployed on dedicated hardware (Netgate security gateway device with pre-installed TNSR software), bare-metal and virtual machines. It is also available as a product in AWS and Azure.

For those who would like to take the first few steps with VPP a good option is to go through the official tutorial. It contains some useful tips on how to install VPP and perform basic operations using the vppctl utility. For example, it shows how to configure the appropriate interfaces on the VPP in order to be able to communicate with the host system or with the second VPP instance. The tutorial also includes simple L3 (routing) and L2 (bridge domains) configurations. To learn more about the VPP architecture and the capabilities it offers, the official documentation and VPP Wiki are worth a look.

In the era of deployments based on NFV and cloud-native paradigms, any solution that offers not only the required functionality but also performance is certainly worth some attention. As VPP meets this condition, it’s likely to become a key component of many solutions and products addressed to the network and cloud markets.