When you start a new software development project, you have to consider which programming language or languages will meet all the technical requirements and offer the most suitable frameworks and libraries to succeed. Go and C++ both have their advantages and disadvantages, so choosing between them requires a fair deal of consideration.

In this article, I’ll touch on topics such as which programming language works better for which projects, and what they are used for. But the main part of the comparison will focus on the speed and readability level of these languages, whether one of them is more secure, and how test code coverage and execution handling look in Go and C++. Also, I’ll mention the benefits of each, and why they are worth your attention.

What is the Go language?

Go, often referred to as “Golang”, is an open source programming language, known for its simplicity. A really strong feature of Go is its built-in support for parallel processing. Go mixes the features of statically-typed languages, such as high performance and type safety, with the features of dynamically-typed and interpreted languages, such as conciseness, expressiveness, readability, and the ability to run code quickly.

C++ is a general-purpose, object-oriented computer language. C++ is considered an intermediate-level language as it includes both high and low-level language features. Its biggest advantage is portability, which allows the creation of programs that can run on different operating systems or platforms easily.

The differences between Go and C++

Comparing these two programming languages could be challenging and - given the amount of information - overwhelming. That is why I’ve prepared this comparison to underline the most crucial differences between them in specific categories.

Are you looking for a comparison of Python and C++? Check our article – Python vs C++.

A clearer understanding of the differences arises from the languages’ ages. Go is the youngest in this sheet whether you look at the date of its release as an open source project on November 10, 2009, or the date Go 1.0 was released: March 2012.

On the other hand, C++ is a real veteran. This programming language was released in 1985, so it’s still being used over 30 years after its first appearance.

What are these programming languages used for?

Go and C++ all have their pros and cons. Of course there is no rule that says you have to use a specific coding language for a particular type of project. But sometimes one language is more suitable than another.

Go could be the perfect choice for cloud services, on-demand services, or media platforms. It also offers the option to code network servers - mainly web servers and microservices. In this article, you can see the big picture of what is Golang good for

As for C++, developers can configure the code to run efficiently in any environment, which makes C++ the perfect base layer for many applications. This programming language is popular when it comes to operating systems, game development, IoT devices, databases, and web browsers. But there is so much more where C++ is core.

Let’s take a look at readability in the first place. The level of readability of a programming language depends on whether the code is easy to read, learn and understand. That makes it one of the most important aspects - easier code is also easier to debug.

The Go programming language is built around simplicity and scalability, also defined as a simpler and more compact, procedural, and concurrent language. Go is known for its minimal syntax. What’s more, there have been no serious syntax modifications in recent years, so the code isn’t overcomplicated. That makes the Go language one of the most readable languages.

C++ is an object-oriented, procedural, functional, and general-purpose mid-level language. C++ syntax has expanded over the years, and nowadays the language is completely different from its original version. That increases C++’s readability.

This table shows the runtime of each of the three programming languages on selected tasks. You can find more data in these complex comparisons Go vs C++ here. 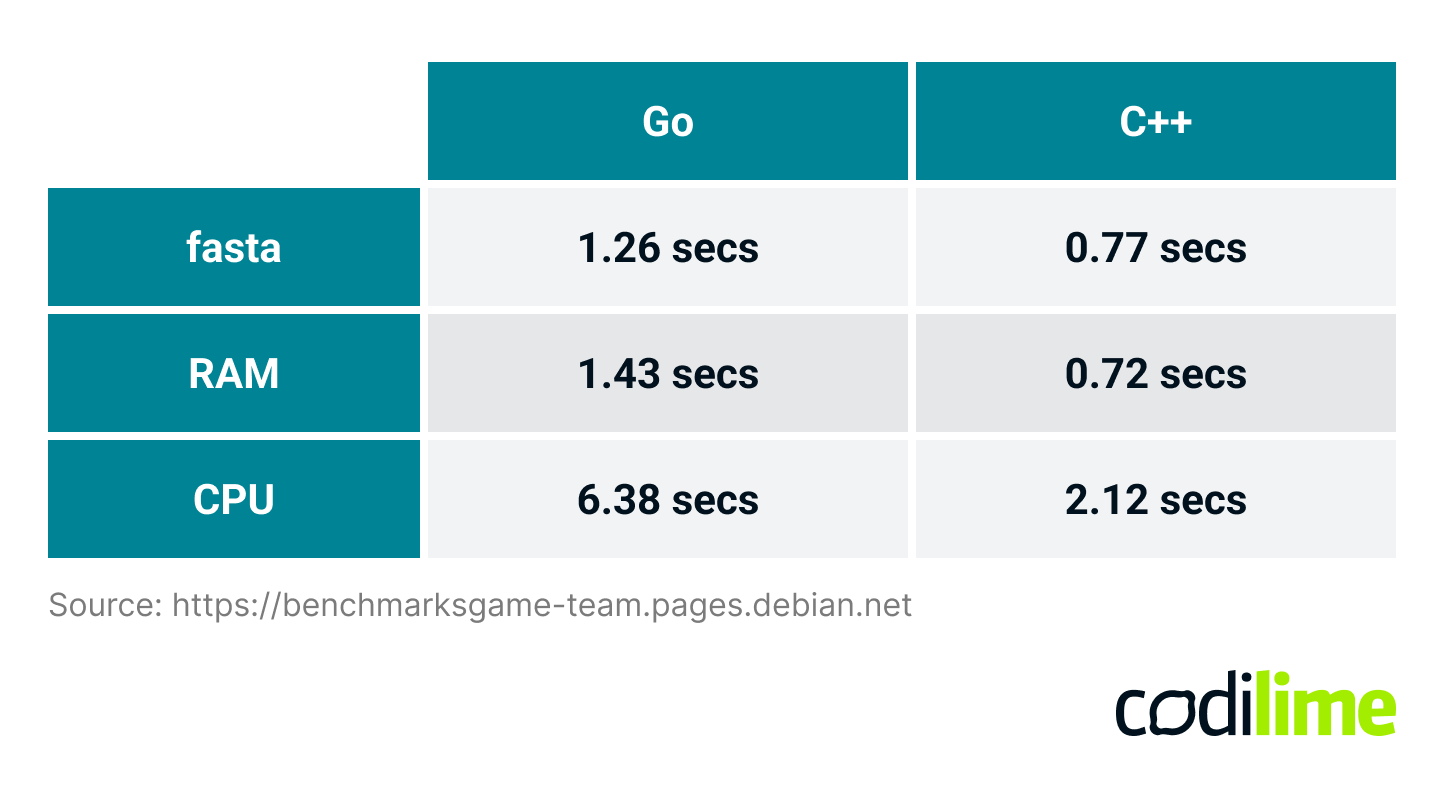 Libraries in Go and C++

Libraries in programming are collections of prewritten code, configuration data, documentation, and help data. They may also include subroutines, classes, values or type specifications. Simply put, they offer help with optimizing tasks during coding.

Go has an “awesome” site with curated libraries, frameworks, and software. You can find it here.

The C++ community built a similar page on GitHub, inspired to be “awesome” too. You should bear in mind that this is a bottom-up initiative, without any official sponsorship or patronage.

This metric shows how many code lines successfully pass the test procedure - it helps with supervising the quality and performance of the code.

With the Go 1.2 release, its creators provided an improved tool for test coverage. They had reviewed the existing test coverage tools, and they eliminated their weaknesses, e.g. difficult implementation. One of the Go language creators, Rob Pike, described the whole Go cover story.

In C++, it is also possible to use a code coverage test feature, but only in the Visual Studio Enterprise edition. Another example of a solution is gcov. This tool has to be used with the GNU Compiler Collection (GCC) to test code coverage.

Each of these programming languages enables you to cover the code with tests but the Go tool seems to be a bit more versalite.

What is exception handling?

Let’s start with the definition of an exception. An exception is any anomalous or exceptional condition requiring special processing. It occurs during program execution. So exception handling is a process of responding to potential exceptions.

How does exception handling look in the Go language?

In Go, errors are provided as a return value - the function will return it if something unwanted happens. It is a different approach from the more common try/catch way. You are even able to create personalized errors and manage them under custom conditions.

The defer, panic and recover Go language statements are also worth mentioning.

Exceptions help to deal with potential errors by moving control to handlers. In C++, exception handling is managed by the keywords throw, try, and catch:

Probably, there is no way to choose a single best way of handling exceptions. Everything depends on your application needs, but now you can easily compare the solutions provided by each of these programming languages.

Which programming language has the biggest community?

How many developers actively use each of these programming languages matters. A bigger community increases the chances of curated and actual frameworks and libraries. So, everything that can make an engineers’ work more effective and easier. How many active developers do each of these languages have? Let’s compare the numbers:

The C++ community has a visible dominance over the Go language. Its popularity has grown constantly over the years and with it, the community in the background.

The Go programming language is a good choice if you aren’t sure how your project will develop in the future. It goes with both small projects and when they grow up because, thanks to Go, you can easily scale and transform them. Larger enterprises appreciate Go’s help with the management of higher volumes of traffic.

Tracking dependencies allow us to identify and reduce risk in the software supply chain. Go has a very effective way of tracking dependencies - Go modules. To track and manage added dependencies you add code to the module. That creates a go.mod file, with all dependencies listed. When you add dependencies, Go tools create a go.sum file that contains checksums of the modules you depend on. Golang uses this to verify the integrity of downloaded module files - this is helpful for other developers working on the project.

What is also worth mentioning, is the possibility of creating versions of the modules:

They signal if it is compatible with older versions and if it is stable itself.

While in other languages, we need to take care of tooling ourselves, Go is very helpful in this respect. Out of the box, we get a testing and benchmarking framework which invites developers to follow coding practices. Choosing the right tool for the project allows the developer community to focus on improving and contributing to the aforementioned toolset. Thanks to modules, installing new tools and tracking their versions are as easy as using the ‘go get’ command.

Go offers testing and benchmarking frameworks out of the box. It saves developers time on searching and choosing the right tools. Moreover, it gives them space to focus on improving and contributing to the Go toolset.

This means two or more tasks can start, run, and complete in overlapping time periods - at the same time or at least seemingly at the same time (concurrently). If the computer only has one CPU, the application won’t process more than one task simultaneously, but more than one task will be processed at a time. Concurrency in Go includes multi-threading, multi-processing, and asynchrony.

Even if C++ is often described as fast and general purpose, there is something you should be aware of. Some projects, such as compiled applications, will need specific libraries installed. What’s more, C++ can be used in a wide variety of projects: enterprise applications, games, graphics, or applications requiring calculations.

Over the years, a strong community has grown around the C++ language. Whatever issue you face, it’s very probable that someone has had the same problem before, and already resolved it. Often, you only need to find the solution somewhere on the Internet.

C++ is an object-oriented programming language

Classes, inheritance, polymorphism, data abstraction, and encapsulation - these are all features of C++. They ease a developer’s work by, for example, providing better code reusability and program maintainability.

Despite its 10+ years of history, Golang's minimal syntax still is a great differentiator compared with the other programming languages. The lack of changes in syntax means that even older programs written in Go are only slightly different to the newer ones. Sometimes there are no differences at all. What’s more, the compilation of code is a fast process (despite the need for a compiler), and the ready program is executed fast and uses little RAM. These could be the reasons why almost of 63% developers who had a chance to work with Go avow their positive experiences and willingness to work with it next year.

Other interesting conclusions are highlighted in the recent Go Developer Survey. Almost 10,000 respondents shared their opinion about the Go programming language. In some cases they were almost of one mind:

We couldn't imagine a more honest recommendation than one directly from the developers’ community, and we won’t be surprised if the Go language grows even stronger. If you want to learn more about this language, read our other articles: