What is Python Used For?

Nowadays, it is almost impossible not to have heard about the Python programming language. There are numerous sources that describe this technology, but sometimes, one piece of information is missing. What actually is Python used for? In what types of projects does Python work the best? Sometimes there are so many questions and so few answers.

This article aims to dispel any doubts and show Python’s possibilities.

Python is a high-level, procedural, interpreted, object-oriented with dynamic semantics language. As a general-purpose language, Python is not predefined for any specific problem – that feature makes it one of the most popular languages among the developer’s community and is the third most popular technology.

Python is an incredibly versatile technology – that is a fact. However, for what projects do developers choose this programming language the most often?

What is the main use of Python?

The most popular uses for the Python language are software and application development.

What is more, it is almost equally often used for:

They are broad areas, aren’t they? And these are only the most popular usages, not every possible one. This proves the Python programming language is a general purpose language on paper and in practice.

There are many reasons to use Python, but one of the most compelling is that it is a popular, widely supported technology. There are many sources with guides and tips and tricks for developers. There are many Python developers on the market now – and both the experienced and beginners are working hard on developing the language.

The popular and active community for this language also has other benefits. There is an excellent chance that any issue that occurs while coding already has a solution that is ready to use.

Python is open source – it is free to use even for commercial purposes. That accelerates the development process of this language and has the positive impact of new libraries and modules appearing more quickly.

Python is also known for its flat learning curve and is easy to learn for entry-level developers. That translates to more developers on the market, and as a result it is easier to build a Python development team with specialized knowledge suitable for a specific project. 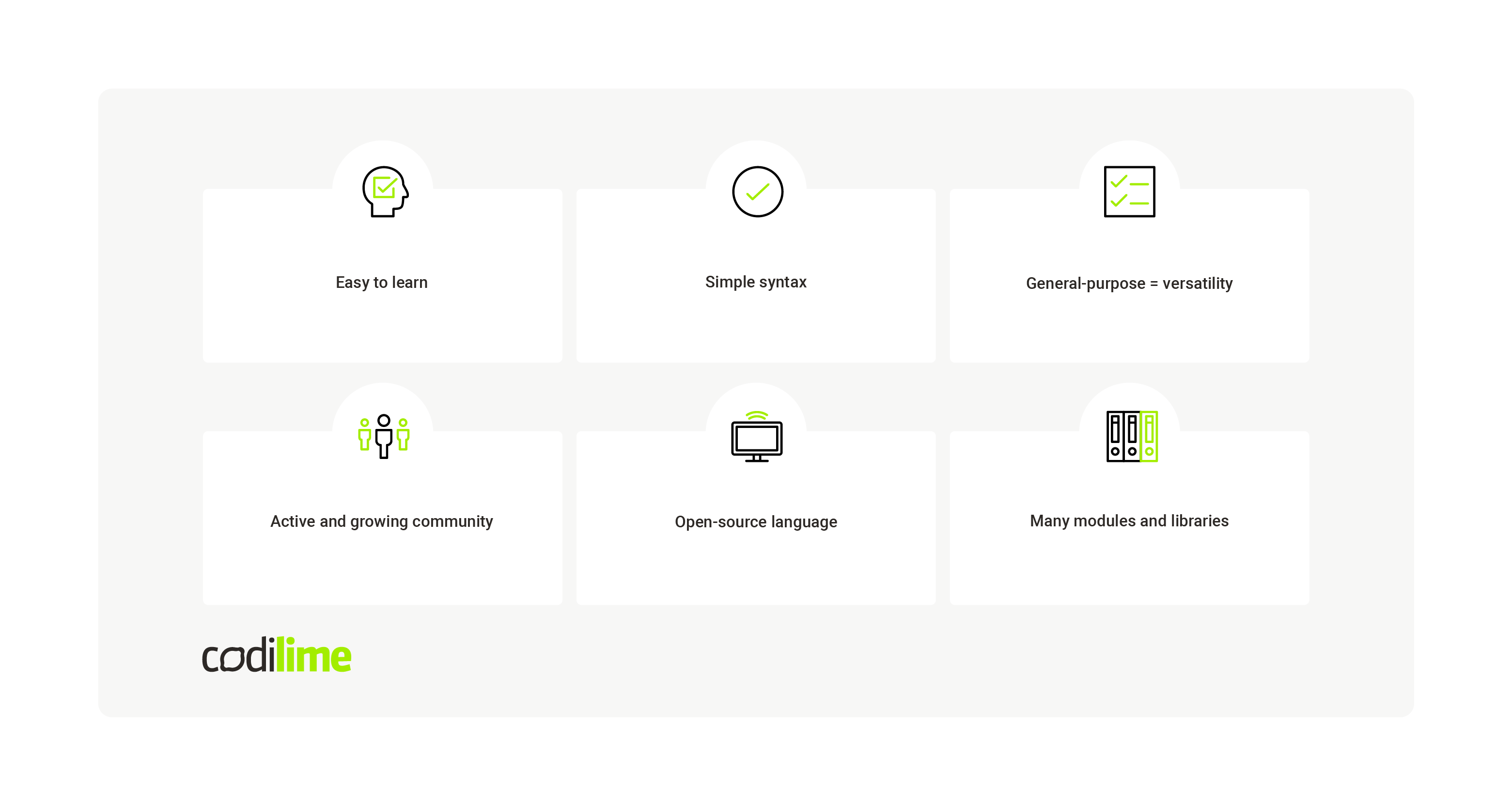 The above list is not complete – more reasons why Python is so popular are mentioned in our previous post.

What can Python be used for? 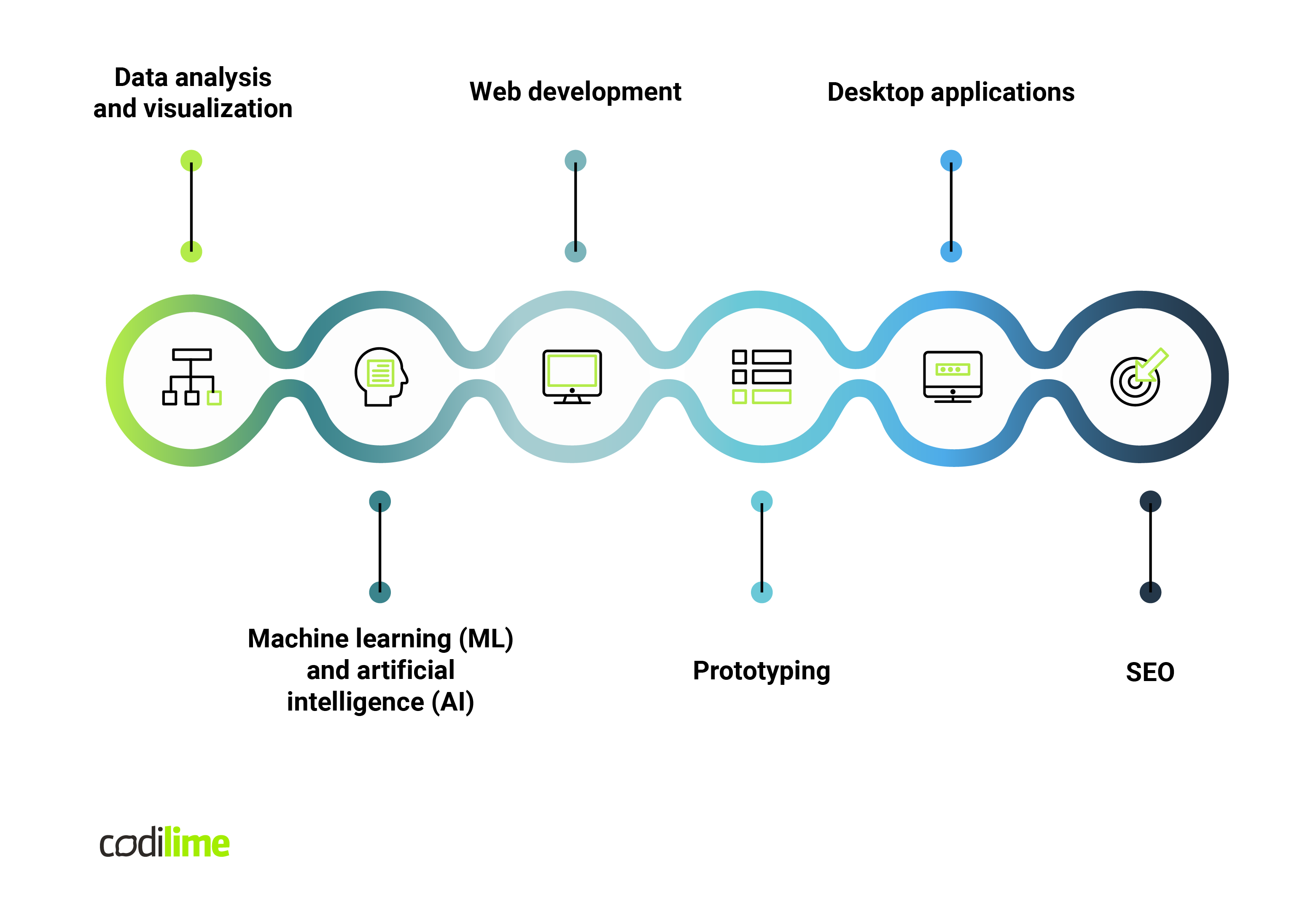 Python is commonly used to build and create data visualizations and analysis thanks to the availability of different histograms, graphs, pie charts, and 3D plots. It also allows the separation of relevant data for better analysis of the outputs. This language also offers many libraries that facilitate writing code for this purpose, like Seaborn.

Both ML and AI require a specific approach and have greater demands. Technology which supports machine learning and artificial intelligence projects should be stable, secure, and offer dedicated tools. Python fulfills every requirement, which makes it a perfect choice for these kinds of projects.

Python is often a choice for web development thanks to its simple, similar-to-English syntax, which helps save developers’ time, and its frameworks – Flask, Django and Pyramid are probably the most well-known examples. All of this makes web development easier with Python’s database access, content management, and data authorisation functions.

Python has easy to implement static and dynamic data analysis which makes it a great solution for prototyping, testing and debugging tools.

A programming language and search engine optimization? Yes, they can help each other out. Python can be used to analyze data sets to identify broken links or other issues on websites and can automate these tasks.

When choosing the technology for a project, finding the correct programming language is a must. If you are wondering which types of projects are better with Python, Go or C++, check out our previous article comparing Go vs Python and C++.

Python offers a bunch of different tools and frameworks that are used in various fields. Django and Pyramid are probably two of the most well-known Python frameworks that are used for web development. For scientific and numeric computing Python provides solutions supporting data analysis, and dedicated packages for mathematics, science, and engineering (SciPy, Pandas). This programming language also helps with developing e-commerce systems – Odoo and Tryton facilitate the building of such systems.

These uses are only a drop in the bucket of what this language offers – here, you can find a comprehensive list of applications for Python.

What is Python used for at CodiLime? 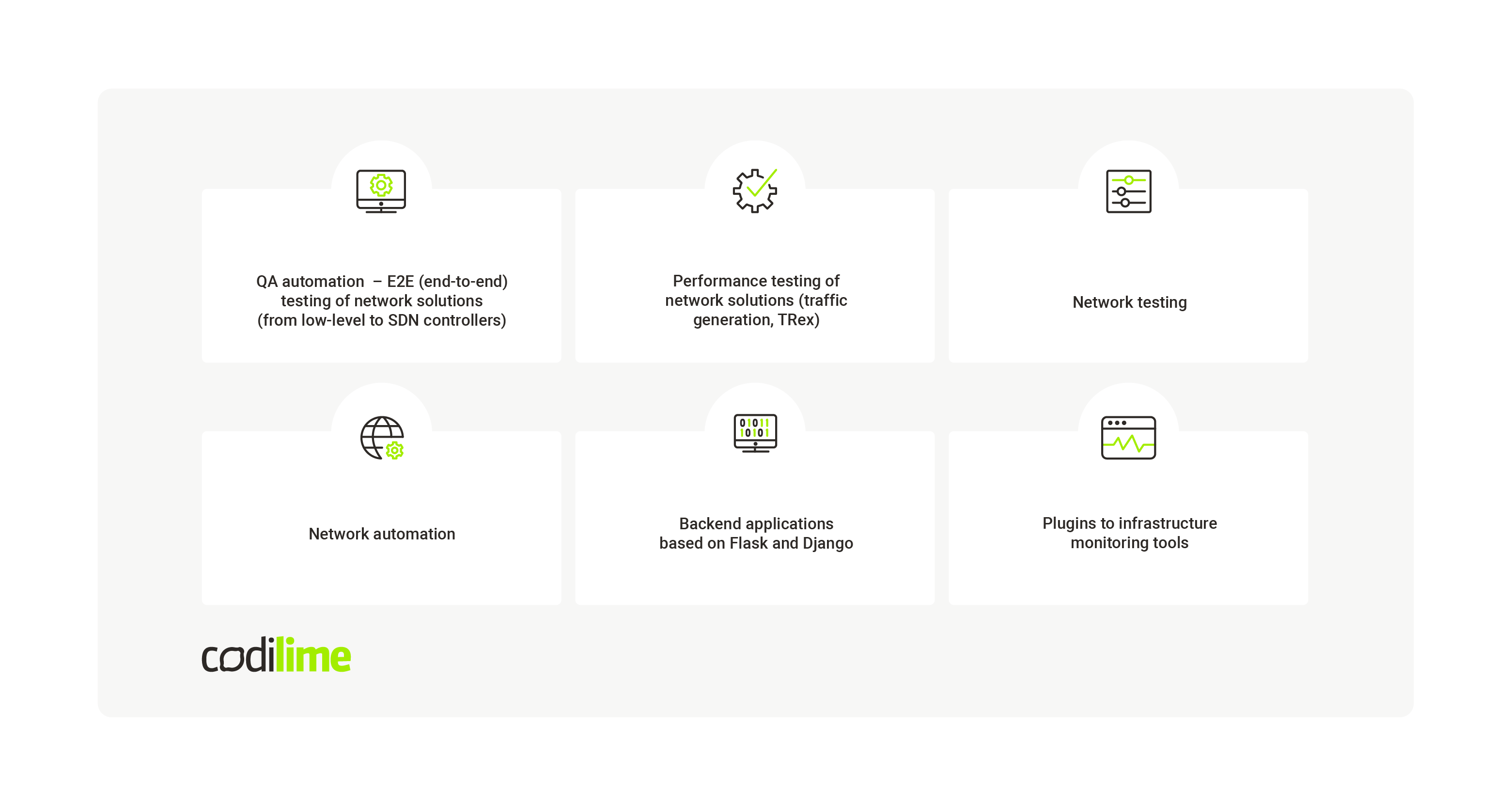 So far we’ve seen Python's versatility, but besides describing how others benefit from Python, we also want to share how we do it at CodiLime. Our developers appreciate Python's support with tasks connected with automation, whether we are talking about end-to-end tests of network solutions (both low- and high-level ones), network testing and automation, or even more options.

Are you interested in our other Python development services? Check out our dedicated Python webpage, where you can find more information about how Python can positively impact your project – check out the link above. And that is not all – there you will find real-life use cases showing how we have used Python to help our clients.

The Python programming language is a future-proof technology. Thanks to its active and growing community, Python can adjust to both current and future requirements and respond to different developers’ needs.

It would not be an exaggeration to say that Python could handle almost any development challenge or requirement.

15 minutes
Why is the Python programming language so popular?
Multiple authors