Rare releases, tons of manual work, critical bugs detected too late, ineffective and late feedback—these problems plague the software development process many companies keep in place. They can be tackled by turning to continuous integration coupled with Continuous Delivery/Continuous Deployment, which will also generate more value for your customers/clients. Read on to understand what business benefits of CI/CD you may expect in your company.

The torments of manual delivery

In the traditional approach to software development, major releases were spread out, occurring quite rarely—every six months, for example. All bug fixes, functionality enhancements and new features collected over a long period of time had to be packed and released in one massive update. The entire process required heavy preparations long before the release data and all hands on deck when the software went live. Most actions were done manually and were thus prone to human error.

Additionally, the constant pressure from management to shorten time-to-market as much as possible made it impossible to test all new features thoroughly. As a result, the new version was often buggy and the company had to spend extra money fixing issues detected after the release. Long night shifts left developers frustrated, while users were ultimately totally deluded, as a shiny new version proved inferior to the more reliable one it had replaced. 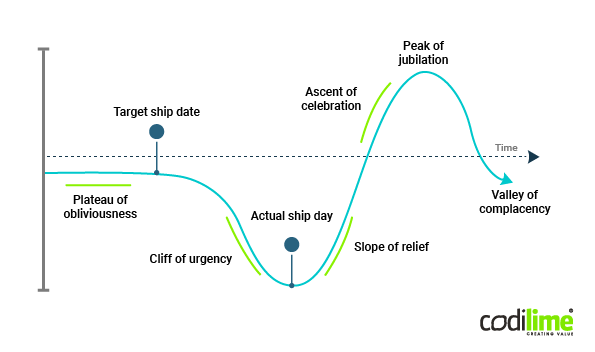 DevOps methodology is the response to the pitfalls of manual delivery.

From a business perspective, DevOps means improving communication and collaboration among stakeholders in order to increase the speed and quality of software deployment and thus shorten the time to market of new features.

The DevOps model can be broken down into five key areas that should be considered principles or best practices for the proper implementation of a CI/CD process. They include:

A CI/CD pipeline as remedy

A CI/CD pipeline is the practical implementation of DevOps principles. Below is a brief overview of what CI/CD stands for.

Continuous Integration (CI) means using automation tools to build, test and merge code seamlessly. This is to ensure that code coming from different developers and components is free of errors. Automated tests help spot bugs at the early stage of software development and fix them immediately

Continuous Delivery (CD) is the practice of releasing software in short cycles, with greater speed and frequency. New code is released in smaller batches, even a few times a day. This makes it more bug-resistant and easier to manage.

CD also means Continuous Deployment, or the constant and automated production deployment of every change made to the code, ideally without any human intervention. This is Continuous Delivery taken to a new level of automation. 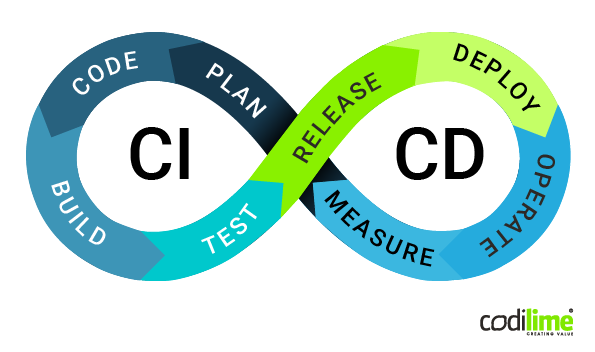 A properly set up and optimized CI/CD pipeline brings considerable benefits to the entire software development process. Let's show what business benefits of CI/CD pipeline your company may expect.

One of the most important business benefits of CI/CD is that it improves overall code quality. Since code is released in small batches, it is possible to test it thoroughly (e.g. using unit tests) detecting and fixing the most serious bugs before software is deployed to production. Gradual changes to the code are also more manageable. Thus the probability that a critical bug is detected once your product goes live is lowered considerably. Additionally, automated tests allow you to fix bugs immediately, which is much easier and less costly than allowing them to fester.

If code changes are small, you can release software builds faster—essentially, on demand. This improves flexibility and the ability to ship new functionalities. Now when users ask for new features or competitors introduce enhancements, your reaction can be faster.

Automation to reduce costs and labour

Automation is one of the most important reasons to implement a CI/CD pipeline. Build automation, automated testing and deployment not only make the life of the DevOps team easier, but also slash costs. Automated actions are also less susceptible to human error and easier to manage. Ideally, every deployment into the production environment should be performed without human intervention. This is what Continuous Deployment is about.

The benefits of rapid feedback

What is so great about the CI/CD process is the instant feedback you get about your code and new build. As failure is a normal occurrence, you should apply the principle of failing fast. This can be achieved by automating tests. When automated tests detect a bug, it can be fixed rapidly. The same is true for automated deployment: if the metrics being monitored suggest there’s an issue with a new update, it will automatically be rolled back, thus protecting your company’s reputation from any harm it may suffer when faulty software is released to the public.

Every successful CI/CD process is based on effective communication. A CI/CD pipeline is a common framework for all developers, testers and product managers working on software development. Additionally, a flat management structure allows for more flexibility and initiative while enhancing the sense of responsibility among team members for delivering an outstanding product to end users. This increases the business value of the company.

Every application after its release should be monitored carefully for possible issues. You should consider continuous monitoring and observability the backbone of your CI/CD pipeline. They allow you to monitor health, performance and reliability and to take the necessary actions when needed. Monitoring metrics will also allow you to create actionable insight and further improve your software product. This is a DevOps principle “Measure everything” applied in practice.

The ultimate goal of every CI/CD implementation is to make customers/clients happy. Buggy software can harm a company's reputation, sometimes irreparably. Fast and frequent releases, new features shipped regularly, bugs fixed promptly and immediate reaction to feedback—these are the major factors that will make end-users happy to pay for your software. They can be achieved thanks to embracing CI/CD in your company.

Interested in the business benefits of CI/CD, but don’t know where to start? Read our white paper “CI/CD in six weeks: setup and optimization” to see how we can help.